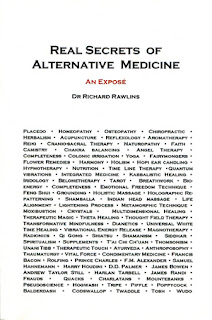 This is a book on an epic scale by an extremely knowledgeable author. In its three main sections Dr Richard Rawlins, practicing magician, hypnotist, medical practitioner and specialist surgeon takes the reader on a detailed journey through what lies behind complementary and alternative medicine (CAM) by exploring both the macroscopic—from the big-bang to human evolution—and the microscopic—from Steiner schools, cognitive dissonance and the ingredients of the Queen’s coronation oil, to those members of the society of apothecaries who apply cold water behind the ears to refresh themselves during meetings.

The first section covers the background to science and how it has developed alongside faith and religion, it looks at some of the ways CAM may appear to work and some of the semantic tricks and ‘sleights of mind’ employed by its practitioners as they ply their trade. The second section gives a more conventional narrative, covering many of the principle practices and personalities of CAM—chiropractic, homeopathy, acupuncture and so forth while the final section addresses the ways CAM may actually work, with a detailed consideration of one of the central themes of the book—the ethical use of the placebo in medical practice and a few suggestions as to how the scientific and medical world can constructively regard and even engage with CAM.

Using his theatrical experience, both surgical and stage, Dr Rawlins is ideally placed to see the devices and artifice of the CAM practitioner for what they are and point out the contrasts between those who make a career out of deception—honestly in the case of the stage magician, less so in the case of those who profit by CAM. The author’s love of words and language shines throughout the book. He is at pains to enlighten the reader with the roots and origins of words, many of which the non-linguist may have taken for granted. Who knew for instance what the origin of the term ‘clinical’ was, or where the word ‘electron’ or even simply ‘drug’ came from?

This passion for words extends to indignation that CAM has got all the catchy ones—traditional, holistic, complementary and so forth, and is disingenuously misusing others—the homeopaths’ mistranslation of ‘Prüfung’ for one. So, in response, Rawlins has devised a novel lexicon of his own, in which, for example, a practitioner of CAM becomes a ‘camist’ and a patient is a ‘camee’ while ‘placedo’ (as practised by ‘placebists’) is the consideration of the path to a better understanding of placebo effects. Critics of science-based medicine talk of ‘big-pharma’, Rawlins describes the CAM industry as ‘big-charma’ while CAM practices themselves are referred to, not as ‘complementary’, but ‘condimentary’—producing flavour and pleasurable feelings but with ‘no substantial effect on any pathological or physical process’. The phrase ‘Traditional Western Medicine’ (TWM) comes as a surprise to the reader, but when considered carefully is found to be true—modern, science-based doctors do indeed practice TWM which has evolved from the ancient practices of the western classical world and has as much right to the label ‘traditional’ as has ‘modern’ Traditional Chinese Medicine (TCM). My favourite Rawlinism is ‘wudo’—the path of nothingness, as followed by those who employ CAM.

Dr Rawlins explores much of his subject using detailed biographical information on some of the more prominent characters, ancient and modern, from both sides of the debate and in this way his work is, apart from anything else, a superb reference book to turn to when detailed information regarding CAM, the history and development of science and medicine or any of its personalities is needed. So I hope I can be forgiven for one small criticism of an otherwise excellent volume—an index would have been nice—perhaps something to consider for the second edition.

All in all, Real Secrets of Alternative Medicine is an enjoyable and original insight into the subject matter from an author whose familiarity with illusion and medicine has given him a unique perspective on human nature. It deserves a place in the library of anyone who wishes to understand and learn from, rather than simply ridicule, complementary and alternative medicine and discover some of the reasons why, despite firm evidence of its lack of efficacy, it continues to thrive. I would recommend anyone interested in a serious exploration of CAM to buy a copy but of course, to use one of Dr Rawlins’s preferred phrases, you must be the judge!
Posted by Aillas at 16:56