Time for a Reality Check

OK, time for a reality check. What exactly is this thing called homeopathy that everyone is going on about? Here is a summary, most of this stuff is available in other forms elsewhere but I just felt a review might be called for.

It's magic you know:
Homeopathy was made up, apropos of nothing at all, around 200 years ago by a German doctor called Hahnemann. Like many of the treatments of the time it had no rational basis and was more akin to sympathetic magic than anything we would call science today. 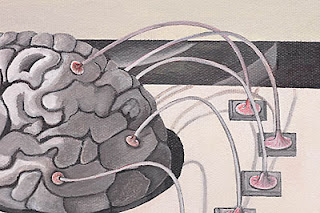 Other similar contemporary practices included humoural medicine, where practitioners would use for instance firing, purging and bleeding to restore “balance”. Herbalists believed that the form or location of a plant would give it magical properties so dock leaves, since they grow close to nettles would alleviate the nettle's sting; the leaves of the dandelion were taken, by virtue of their resemblance to the claws of the lion, to confer strength and liverwort, because of its resemblance to the lobes of the human liver, was used to treat liver conditions. In other societies it was thought that rhino horn would bring potency by virtue of its shape and eating the heart of a lion would bring courage.

In the same way homeopaths believe in their first "Law of Similars" where remedies are believed to “cancel out” disease by employing ingredients reported to cause symptoms in healthy patients similar to the those caused by a disease in ill patients. So, we read that healthy patients taking (proving) a remedy based on the Peregrine falcon (1) experience an urge to drive very quickly, can’t get off roundabouts when driving as they feel an urge to whirl around in the way a soaring raptor does and also have dreams about raw meat. Healthy volunteers taking a remedy based on the light of the planet Venus (2) can expect to feel, among other things “floaty and aware of the universe around [them]”. On the other hand portions of the Berlin wall (3) when given to anxious patients will promote agreement and peace. Dinosaur bones or calcium will supposedly help in the treatment of tumours which produce boney proliferation. Onions cause runny eyes and noses so they are used to treat people with a head cold as they have runny eyes and noses.

There is no reason for the choice of onion, peregrine falcon, anti-matter, condoms, thunderstorms, dead bees or any of the other base ingredients used in homeopathic remedies other than the belief that some of their 'power’ will be transferred to the patient. This isn't medical thinking, it's magical thinking with no more scientific credibility than selling warts or trying to tell the sex of an unborn baby by dangling a wedding ring on a bit of string over an expectant mother.

Water, water everywhere (oh, and some sugar):
The second principal of homeopathy, invented to avoid 'provers' poisoning themselves while testing new remedies, is the law of infinitesimals where the base remedy, having been selected, is then diluted to astronomical levels. The degree of dilution can be read on the labels of homeopathic remedies so for example 20X means the original base has been diluted by a tenth (the X) and this dilution has itself been diluted to the same degree 20 times. 30C means the base has been diluted (in water or alcohol) 100 fold (the C) and this has been repeated 30 times. It is known that, by virtue of Avogadro's rule any remedy diluted further than 12C will have no trace of the base material in the solution - after that you’re diluting water. The most extreme dilutions (200C for example) would require an amount of water equivalent to the total number of all molecules in the known universe to give a chance of there being even a single molecule of the base solution within it.

Then, as if this wasn’t all credibility-stretching enough, homeopaths go on to claim that the more dilute the remedy, the stronger the "potency". So ironically remedies of 12C or below which could actually contain an active ingredient are held to be weak and ineffective whereas remedies containing nothing but water are considered so powerful by the homeopathic cognisenti they could do permanent harm in the wrong hands.

Thanks for the memory:
Homeopathic proponents maintain that water must have some sort of memory and can somehow retain an imprint of the base material throughout these serial dilutions while at the same time conveniently managing to forget about all the unavoidable contaminants present even in the purest of water samples. Even a single molecule of silica from the glass vials used in the process would count as massive contamination on the scale of dilutions homeopaths work with. This memory is supposedly promoted by "sucussion", the bashing or vigorous shaking of the solution between dilutions. Hahnemann felt a leather bound bible was most effective for this purpose he gives no explanation or information about how he came to this conclusion, he just seems to have decided this was the best way.

Speculation about possible mechanisms for this 'memory' have, over the years included a spiritual force, electricity, molecular 'holes', molecular vibrations, the clumping of water molecules (a genuine phenomenon but one which last for nanoseconds only), “spallation”, so called "nano-bubbles", chaos theory and most recently quantum physics. Some even claim to have isolated this memory signal and encapsulated it so that it can be transmitted to the patient by telephone or email or can be incorporated into preposterous machines such as the Voice Programmed Remedy Maker (4) or the E-lybra machine (5) where you put a bit of the patient in one part of the machine, press a button and take your magically potentised pillules out of another.
No evidence has ever been found for any sort of memory of water despite years of research and numerous false claims from enthusiasts. Even if such evidence were forthcoming though there would still be a problem. Often homeopaths will not use water (or alcohol) based remedies directly but will transfer the remedy to sugar tablets. This is done by simply putting a drop of potentised water into a pot of pills. The properties of the liquid are then supposed to transmit to the solid tablets by an unexplained process known as grafting. In some cases homeopaths will go further and claim to be able to potentise a whole bottle of ordinary sugar tablets by dropping a single potentised tablet into the pot. No one so far has even broached the subject of the memory of sugar.

The evidence Watson:
The fundamental principles of homeopathy are nonsensical. Homeopathic remedies are mere water or sugar or alcohol - nothing else. There is no potency, no magic energy, no ‘life force’ possessed by any remedy. It is impossible to distinguish between different remedies by any known means of analysis other than reading the label. If homeopathy is found to work it will mean that there is a major property of water in its liquid state which has so far been missed by every observer and researcher since the time of Aristotle; a major gap in physics itself which homeopaths alone are able to see.

That is the reason homeopathy has such a credibility gap and why it is so important to scrutinise papers which claim efficacy for homeopathy carefully. There is just too much vested interests among homeopaths to prove their modality works that they will quote trials which time and again are found to be sub-standard with poor methodology, inadequate blinding and inadequate statistical strength. Highlighting these shortcomings makes no difference and the same papers will be recycled time and again regardless. Homeopaths will always quote positive evidence, regardless of its quality, so long as it supports their preconceptions that their modality works.

The truth is, when the big picture is considered and the poor quality trials separated out from the relatively few good ones the blindingly obvious conclusion is that there is no evidence that homeopathic sugar tablets perform any better than ordinary sugar tablets. The latest in a long line of quality meta analyses disproving homeopathy (6) concludes,

"Our study powerfully illustrates the interplay and cumulative effect of different sources of bias. We acknowledge that to prove a negative is impossible, but we have shown that the effects seen in placebo controlled trials of homoeopathy are compatible with the placebo hypothesis" and "This finding is compatible with the notion that the clinical effects of homoeopathy are placebo effects".


Many sources of good quality evidence refuting homeopathy are available but you don’t have to take my word for it. Have a look at the report of the UK parliamentary committee on science and technology (7) which spent days looking at all the available evidence on homeopathy and taking lengthy submissions from representatives of homeopathic bodies, industry and science. The committee concluded, "To maintain patient trust, choice and safety, the Government should not endorse the use of placebo treatments, including homeopathy. Homeopathy should not be funded on the NHS and the MHRA should stop licensing homeopathic products". Furthermore the witnesses for homeopathy were accused by scientists and the committee of misrepresenting the evidence and submitting trials which were negative for homeopathy or whose authors didn’t make the conclusions that the homeopaths claimed they did (8).

This delibarate misrepresentation is a well worn homeopathic chestnut, as we have seen in this very blog (9) and from our own home grown veterinary homeopaths (10). Unfortunately for the British Homeopathic Association you can't get away with the old "post-some-impressive-references-then-hope-no-one-actually-reads-them" ploy in every case and submitting evidence to parliamentary sub-committees isn't the same as doing a drive by posting to someone's blog and keeping your fingers crossed that no one will notice.
Many call this approach disingenuous, others might call it lying. As for me, well, I couldn't possibly comment.
Come on homeopaths, time to wake up and smell the Coffea Tosta!